Mr. Knight called Akron home for most of his life, working his way up in the family owned Akron Beacon Journal from sports writer to editor, publisher and Pulitzer Prize winning columnist. Mr. Knight was editorial chairman of Knight-Ridder Newspapers Inc. until 1976. He died in 1981.

Five $5,000 scholarships are awarded annually to students who excel in journalism, public relations and communications programs at colleges and universities. Funds raised from the Press Club’s ongoing fund raising efforts, including an annual book sale held on the first Saturday of November, help to support these scholarships, which are awarded at a special luncheon each April. 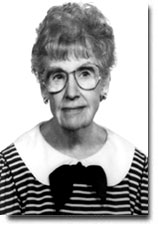 The Ludel B. Sauvageot Scholarship recognizes the Akron Press Club’s late friend, member, teacher and public relations professional. Mrs. Sauvageot was a well-known and respected public relations professional, award-winning journalist, author and educator for more than 65 years. She was a long-time Akron General Medical Center Women’s Board member and trustee of the American Heart Association. In 1946, her vision led to the establishment of the first public relations department for an Ohio hospital at Akron General Medical Center. She was named the department’s first director. The author of four books, she was inducted into the Ohio Women’s Hall of Fame in 1990.

The Ludel Sauvageot Scholarship provides $5,000 and is awarded as part of the John S. Knight annual scholarship program at a luncheon sponsored by the Akron Press Club each April.